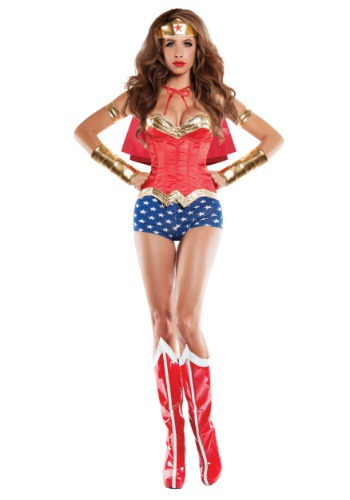 THE WORLD IS WAITING FOR YOU

There just aren't enough lady heroes out there who are making their mark on the world and changing the perspectives of all who see it.  Sure, we've got a bunch of super men and no shortage of goodness leagues that are doing their job and stopping evil from destroying the whole planet.  Yeah.  Yay for them.  It isn't like we're bothered by their heroics or anything.

But, there is something especially heartwarming when you have a gal to go to and a team of wonder women can rise up and fight as a single cohesive unit, like the Greek Amazons who were ready to fight off an entire horde of baddies without even taking a moment to flinch!  Well, there aren't many, but fortunately, the gals who came before you have left an excellent legacy for you to wield!

To make sure that your success is every bit as stunning as your predescesors, we've got this Women's Corseted Wonder Lady Costume that is sure to demonstrate your prowess as a hero.  This corset top laces up the back and features a golden ridge to complement the red.  White and blue stretch knit shorts make up the bottom of the costume and feature a golden W belt that will have folks left in wonder.  Women everywhere will be amazed at your quick reflexes with your foam backed armbands and gauntlet.  Last, the tiara will make you look like a veritable Amazon princess if such a thing could exist!

SO MIGHTY YOU COULD PRACTICALLY FLY

Who knows what powers you'll possess when you spin and transform into this wondrous lady hero?  Combat war and bring peace to everyone, man and woman alike, while inspiring an entirely new generation to pick up where you leave off!  Still, something's missing.  A whip?  Sword?  We're confident that you'll figure something wonderful out!