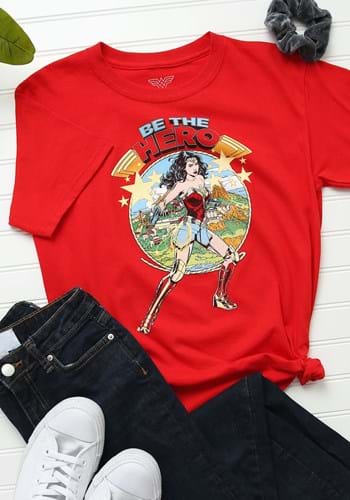 Some kids just have that twinkle in their eyes. It's the superhero spark! They have that heroic attitude and the moral values to match, so they're really just waiting on the superpowers to being their career as a superhero! Well, we think it's a good idea to encourage that superhero attitude and we can't think of a better role model than Wonder Woman.

Ever since 1941, she's been spreading the ideas of truth and compassion to the world. Of course, she's also been kicking some serious bad guy butt along the way! If your child is itching to take on the role of a superhero, then this Wonder Woman Be the Hero T-Shirt for kids is the perfect t-shirt for them!

This kid's shirt comes is licensed from DC comics. It's made out of cotton, which means it's a durable shirt that will hold up through all of your child's heroic playtime. The front of the shirt has a print of Wonder Woman, who's frozen in a heroic pose in front of her home city, Themyscira. It also has the phrase "Be the Hero" printed on the front to help inspire your child to be like Wonder Woman!