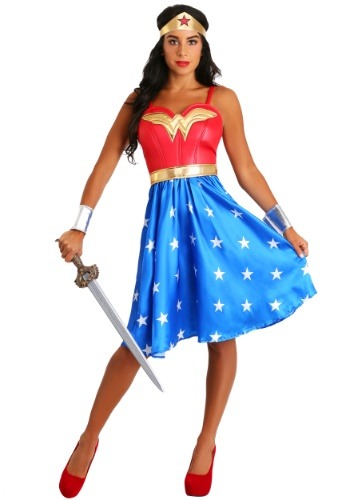 A New Kind of Princess

Diana Prince is an actual Princess. An Amazon Warrior Princess, that is. Though most people don't know that or call her that. Most people just call her Wonder Woman. Because, let's be honest here, she's pretty wonderful. She's got insanely awesome combat skills, strategy, and strength, not to mention her golden lasso and bracers that can deflect freaking bullets That's right. She deflects bullets with her wrist-wear. You know any other superheroes that do that? We didn't think so. Of course, the best part is that she's a smart lady out to serve justice. She uses her powers for good. You know, out to save the world and that kind of stuff.

Our Deluxe Long Dress Wonder Woman Costume is a classy feminine version of Wonder Woman's outfit. It's got the bright blue and red with stars, but the cut is a little different. It includes a star-spangled skirt, foam gauntlets, a foam tiara, belt, and emblazoned red top. You put this on and you'll feel like the empowered Diana Prince herself! Only, don't try to stop any bullets with our bracers. They're not made for that...

Who Runs the World

We all know Wonder Woman has taking-down villains in the bag. Even more exciting . . . she's stylin'. Wonder Woman is usually sporting the red white and blue, with some stars, her nested WW logo, and a killer tiara. There have been many different iterations of her awesome outfit. Some that look like full armor, some the classic bodysuit, and many different versions in between. Now, you can take on the next step in her fashion timeline. Sure, you might not be taking down Demigods or high-tech villains, but you'll surely be rocking a killer look! Just be sure to wear comfortable shoes, you'll want to take on a shield launch if the opportunity arises!