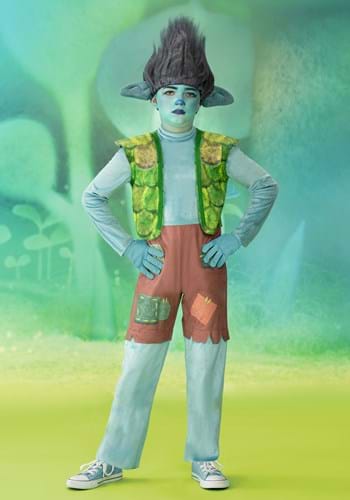 Most trolls are all about singing, dancing, and making some noise. But Branch is well aware that parties come with their own set of dangers when the trolls are still prized for their joy-making flavors. If the trolls had listened to Branch in the beginning of the first Trolls movie, they wouldn't have had nearly as many close calls with the Bergen's cook.

We think it's safe to say that Branch has definitely loosened up in the time that we've known him. He partakes in songs and group hugs. He might even be cool with a flash mob every so often. Still, we like to know that he's there to keep Poppy grounded. Because even if he's branched out into being happy, he's still Branch, and we love him that way!

This exclusive Made By Us Trolls Branch costume was designed by our in-house creative team. The featured jumpsuit has attached patched shorts and vest panels that look like they're fresh from the forest. The base of the suit matches Branch's blue-toned skin, so your kid will feel right at home with the trolls. Topped off with a dark blue wig with attached ears, this costume is ready for Troll-themed fun!

Branch knows how to think on his feet. Whether that means jumping in the way of a rock zombie beam to protect his queen or give his community some grounded advice. Is your kiddo ready to take on his true troll colors? This costume is the perfect way to express himself. Want to finish this out? Consider completing this costume with a little blue makeup and a few friends to play Queen Poppy, Guy Diamond, and maybe even Barb if you want a little edge to your Troll crew! Hmm, if trolls just wanna have fun, this is Halloween is gonna be a blast!