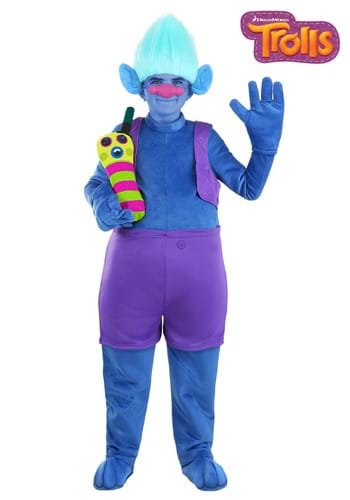 Well, we know who does! Biggie the Troll, that's who! This big fella really makes the Troll community shine with his gregarious artistic skills. He's always up to something new whether that's taking portraits of his pet worm, Mr. Dinkles, or playing dress-up with Mr. Dinkles. Well, now that we think about it, most of his activities have to do with Mr. Dinkles. But enough about the worm, already! This big blue guy is a thoughtful, creative, staple in the Troll community. We love his smooth baritone, strange hobbies, and can-do attitude. Is your kiddo ready to take on the character of Biggie? This Made By Us costume, is sure to make your Halloween extra harmonious!

This fully-licensed Trolls costume will make your kiddo feel right at home in Troll Forest. The soft-blue jumpsuit secures with hook and loop fasteners up the back. Purple shorts and a vest complement the magenta foam nose that straps over your face. The hips of the jumpsuit are padded with soft material giving your young Troll a distinct silhouette. It's topped off with four-fingered mitts and shoe covers that strap on to your shoes with elastic bands.

Turns out, having a case of the blues can be a lot of fun! Biggie is a cheery fella who knows the value of breaking into song at a moment's notice, though his rendition of Who Let The Dogs Out has led to jail time so we'd be careful with letting his love of pop music go too far. Complete this costume with the Mr. Dinkle prop and the Trolls soundtrack on the ready. You never know when Biggie and his cheery friends will want to let loose with a musical interlude! The blues never sounded so cheerful!