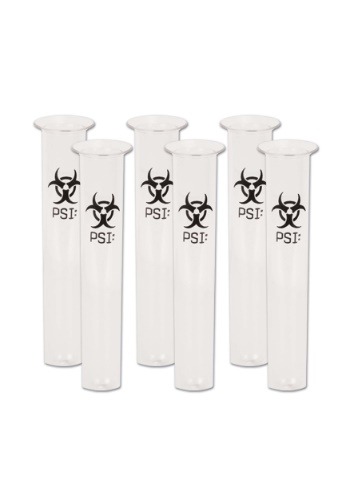 Do you ever wonder how mad scientists remember all the elements that are involved in their formulas? There is so much involved in their crazy plans and the consequences are dire if they get one element wrong. Think about Doctor Frankenstein for example. Not only could he easily have been electrocuted by the bolt of lightning that awakened his monster, he could have ended up with a jolly green giant that thought he was a Golden Retriever if he had gotten the wrong brain! We don't think the neighbors in his village would have approved of walkies of that caliber. The trick to keeping those mad scientist skills sharp? Making sure you take a little refresher in the sciences every so often.

Picking up the books so many years after your AP chemistry course is a lot to ask. What would we suggest instead? Sipping from these test tubes! Not only will you find the beverage refreshing but the tubes are sure to get you into the scientist state of mind, mad or otherwise! They hold two ounces of refreshment and have a flat base so you can set them down without worrying about messing up the lab.

These shot glasses will work for a variety of macabre soirees. Hosting a murder mystery gathering? These are a great way to get people in the investigative state of mind. Whether you and your guests are dressed in old-school lab coats or you're wearing a Hazmat suit, these test tubes are sure to cause some chemistry at your next get together!