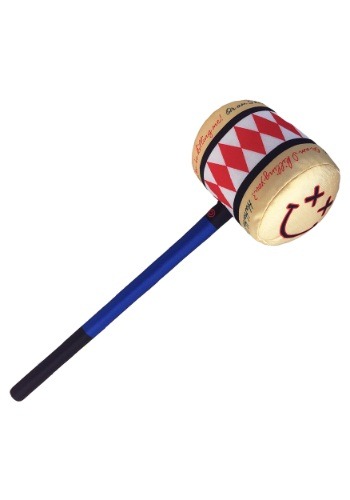 Do you ever wish you could just smash your problems away? There’s a saying like that somewhere: “If all you have is a hammer, everything looks like a nail.” Just imagine… Stand-still traffic jam? Smash! Gone. Faulty internet connection? Smash! Gone. Wobbly chair? Smash! Gone.

Okay, we admit, that’s probably not the best way to fix… well… anything. It would actually cause a lot more problems than it would potentially solve. The roads would be blocked by smashed, broken cars that would take longer to move than regular, working cars. Your internet connection would still be slow, and now you wouldn’t have a computer. Your wobbly chair wouldn’t wobble, true, but you couldn’t sit in it either.

But it sure would be fun for a little bit, wouldn’t it? Harley Quinn understood that. She also understood the need for a good mallet, if you’re really going to commit to smashing your problems away. If you’re going to follow in her footsteps, you should start with this Suicide Squad Harley Quinn SWAT Mallet. The officially licensed mallet looks just like the one Harley used in Suicide Squad—and it sounds just like it, too, thanks to cool crunching sound effects you can trigger when you push a button on the handle. Go ahead—grab the mallet and start smashing! (Just… you know… be responsible about it.)