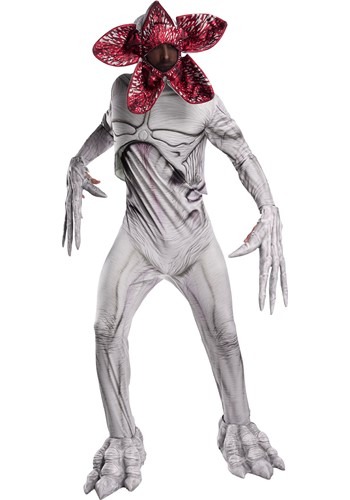 An Upside Down Monster

Mike Wheeler is a pretty creative master of games when he and the kids get around the table to play the iconic tabletop roleplaying game, Dungeons & Dragons. As all Dungeon Masters know, sometimes, you need to take a little creative license when putting your adventures through the ringer. You can't just go right out of the core handbook all the time! Now, technically, Demogorgon is the Prince of Demons. It is a creature with two baboon heads and no shortage of tentacles and horrific powers to display. It's a fearsome demon that nobody likes—just ask either of its heads!

But, it wouldn't have been much fun if the true Demogorgon showed up and just squashed everything to bits in a single oomph. (That's what the second season is for, right, folks!?) And, more importantly, it would be near impossible for anybody to dress up as the creature. The thing is easily a couple of stories tall! Fortunately, Mike offered up the Upside Down's version of the creature. Now, this thing is made of equal levels terror and all in a size that can still chase down a few kids through the school! It's time to watch out for this nasty monster—but don't look too close!

The officially licensed Stranger Things costume comes with a printed jumpsuit that fastens together with the ancient magic of hook and loop strips. It is designed with a horrifying 3D effected ribcage as well! The gloves and shoe covers give you a monstrous look, including oversized fingers and feet. The headpiece is stretchy and easily slips over your head, creating the creepy look of toothy petals while you look through a black mesh hole.

What's the scariest thing about Stranger Things' Demogorgon? How about the fact that the true D&D monster is unique. There can be only one! But, this dimension-hopping demon can come in groups. Team up with some friends and stalk your neighborhood and turn the terror up to 11! (Just watch out for anyone named Eleven!)