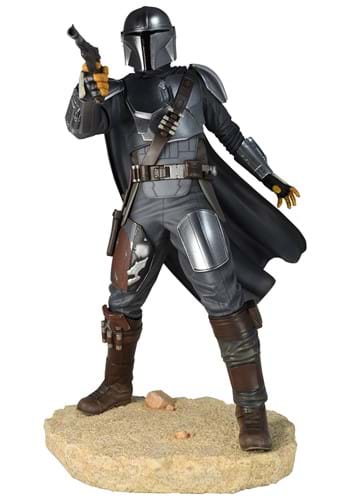 There’s a lot of really cool stuff in the Star Wars universe, and everyone seems to have an opinion about it. It’s all too easy to start an argument around here with a simple sentence like “The Millenium Falcon is kind of overrated.” (Please note: This is a hypothetical example and nobody in the office has actually said this. We all learned our lesson after the Great Jar-Jar Dispute of 2015.) We can have debates about lightsabers, planets, ships, characters, and blue milk for hours. But one thing that we can all agree on is that Mandalorian armor is awesome. What’s cooler than a shiny metal suit that repels blaster fire and a jetpack that you can fly around with?

If you also think beskar is the best, this Premier Collection Mandalorian MK3 Star Wars Statue might be for you. Since Mandalorian iron is rather rare, this figure is made from resin. It features Din Djarin in his trademark armor ready to fire his blaster at anyone that would hurt Grogu. While a life-sized replica would be pretty amazing, it would be hard to put on your bookshelf. That’s why this one is about 10 inches tall so you can display it almost anywhere in your home. This statue will be a fantastic addition to any Star Wars collection!