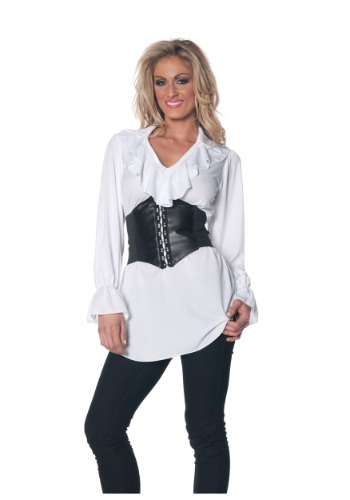 LOOKING BAD TO THE BONE

When it comes to pirates, they have a lot of good weapons at their disposal. Pistols and Cannons are great for fighting from a distance, and when you board the enemies ship, you can take out your cutlass and go to work. But do you know what a pirate's best weapon is? Fear. Fear is without a doubt the most effective way for a pirate ship to take down another vessel. You see, when people are afraid of you, they just give up. That means that you don't lose any good pirates (good as in good at their job, not good people), and you don't waste any ammunition.

That's why a pirate's appearance is so important. If you aren't dressed like a pirate, they won't fear you. Even if you've hoisted the black flag, if you don't look intimidating, they are going to fight back! That's why we're selling this ruffled pirate blouse, a shirt that says "I'm going to take your gold, and look good doing it."

The blouse you'll be wearing is made of 100% polyester knit fabric so that while you'll look like a pirate, you will actually feel like a million bucks! The blouse has a wide collar and a V-neck that is lined with ruffles, which were all the rage back in the day. The long sleeves have elastic at the cuffs, which only adds to the old-timey effect of this costume. This blouse, paired with the right accessories, will make for a fearsome pirate captain costume!

When it comes to a costume, we always tell people that the details are the most important part! How will you accessorize? Maybe an eyepatch? Maybe a hook on one hand? Either of these would be a nice touch, but combined, well, you'd look like the scariest pirate we've ever seen! Whatever you decide to do, we are sure it will turn out great. Have fun!