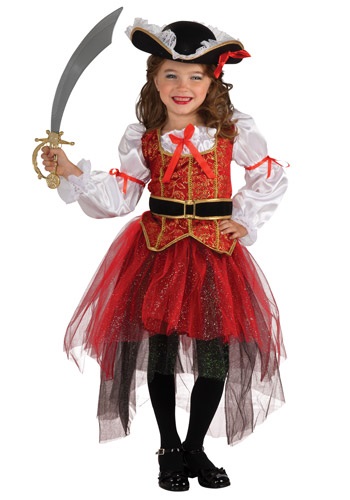 We're not going to lie. We're a bit sick and tired of the little princess schtick. The whole ball gown and tiaras, the movie after movie with a princess tossing herself down and crying in despair? No more, thanks. And since when did girls get portrayed as being so fragile anyway? So helpless? It's almost like they need to be rescued or something.

Which is totally not the case. We're pretty sure those princesses were just dressing up and being so polite because they felt like they had to. That they were crying on stuff because they didn't have a good weapon nearby. If you ask us, we need to stop going on and on about those damsels in distress and start showing our girls some lean mean determined machines. Like, they can still be a princess if they want, but let's give them something a bit fiercer to look up to. Like a ninja or...no! Even better: A pirate.

That's right. A Pirate Princess. Your little one could be all the grace and glam of a princess with the fierce determination and no-nonsense of a pirate! It'll be easy in this Princess Sea Pirate Costume. This little polyester dress has a white shirt with attached red vest complete with gold trim (not to mention some very princess-y ruffles and ribbons). The skirt is red and black tulle, and the outfit comes with a black and gold foam belt complete with faux buckle. The pirate hat is also included with gold trim and bow. So pretty. So pirate-y.

Now, this is a princess we can appreciate! A fighter! A master of the wind and seas! A princess with 'tude! Now doesn't that sound much better than those poor little princesses who had to wait to be rescued? That's what we thought.