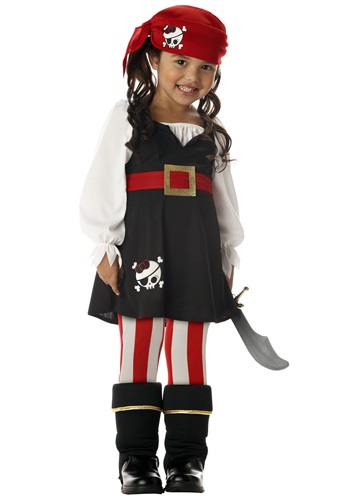 Every little kid dreams of being a pirate at some point. Sure, maybe for awhile they wanted to be an astronaut or a cowgirl or a princess, but now it's time to sail the high seas in search of adventure. We can see the appeal! As much as we love selling costumes, the idea of working on a pirate ship is pretty intriguing. Becoming a fearsome pirate, being feared by your foes, and constantly hunting for gold sounds like a very cool way to make a living. Maybe not cool, but at the very least it would be memorable.

Just imagine being a pirate in the Caribbean. You'd be sailing between all of these beautiful tropical islands over crystal clear waters, just soaking up the sun and looking for treasure. It would almost feel like your on vacation if you weren't constantly fighting with other pirates and the royal navy!

This costume will transform your once sweet little child into a fierce, seafaring scallywag! They'll be wearing white and red striped tights under a black dress. The dress has a red belt sewn on, and a skull and crossbones on the skirt. To protect them from the harsh sun of the open ocean we've included the red bandana, which also sports a skull and crossbones. Lastly, we've included black boot toppers with a gold lining, so that any pair of shoes they might be wearing will be fit for a pirate!

When your little one becomes a pirate, they might forget their manners. If they do, just make sure to remind them of the pirate code! Pirate code says always say please and thank you, and treat others the way you want to be treated. As long as they follow the pirate code, they should be just fine!