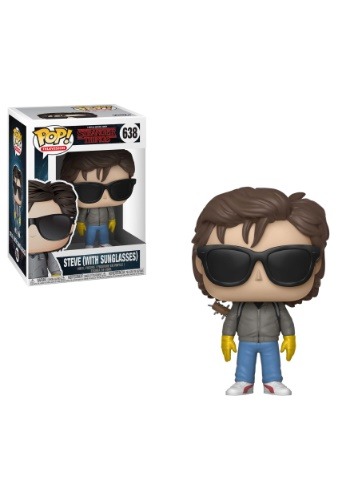 Dang. Can we just say that Steve from Stranger Things is like our number one dude? Sure, like most folks, after season 1 of Stranger Things debuted, we weren't that high on him. Seemed like kind of a jerk! But then season 2 rolls around, and not only do we see his sensitive side, he actually becomes sort of a father figure to Dustin. Yeah, Steve is a regular stand-up dude!

Of course, he's done plenty of stuff along the way to earn our admiration, from setting a bomb-diggity Demogorgon trap, all the way to passing along hair care advice. Well, like the rest of you, we're waiting for season 3, so in the meantime... let's get some Steve stuff!

Any fan or collector is sure to be all about Stranger Things collectibles, and when you start collecting, our first stop is always with Funko. And that's why we've got the fresh figures from the POP! Stranger Things series! Get this Steve with Sunglasses Figure, and you'll have a POP! of him just like he looks in season 2.