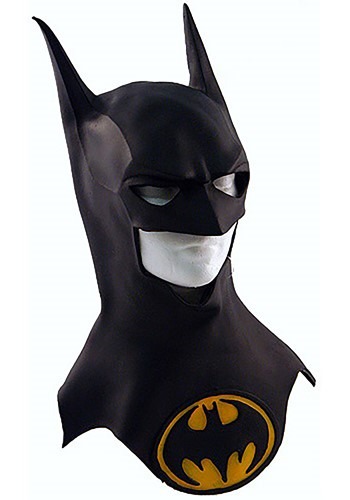 Recently, we’ve seen a dynamic increase in the number of Batmen on the Internet.  Whether it is Bat-Dad telling his kiddos and delightful wife all about the appropriate way to put peanut butter on their sandwiches or reminding them of a few randomly invented house rules or Bat-Dog showing off its talents for going downhill on a skateboard, they are each recognized not by the crimes that they are preventing or the goonies that they’re giving the fist of justice to… but for the cowl and they’re wearing!  Those iconic ears and masked faces strike fear in the hearts of would-be villains and some serious giggles (which we’re sure represent respect) for the rest of us.

Show those other Bats who the real Batman is by donning this official Original Movie Batman Mask.  The mask and cowl feature the pointed bat ears, nose cowl and mouth opening, and a neck and shoulder flap that features the Batman logo in yellow and black.  Transform into the conventionally recognized Batman with the full cape and armor or be Casual Batman in a T-Shirt and Jeans or Business Professional Batman in a full suit.  Because, with this cowl, every day is Bat-Day.