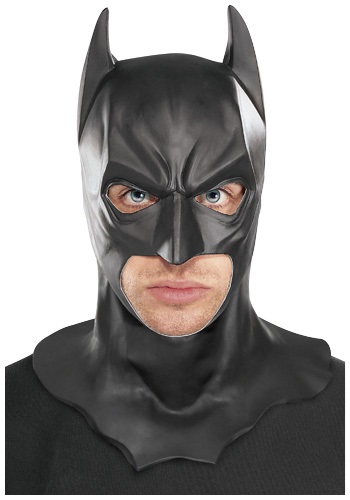 Batman’s cowl is the most recognizable part of his ensemble. The cape’s great, but the Riddler could steal it––as part of an elaborate riddle, of course––and we’d still know it was Batman. Sure, he’d look a little naked without his billowing cape, but without the cowl? Forget about it. Defend Gotham, or your own little corner of the world, with this licensed Mens Latex batman Mask. You’ll look just like the Dark Knight.

Now the not-so-fun part. Just in case there are any gullible, naïve, or overly imaginative consumers out there confused about the line between fiction and reality, we like to make this stuff really clear. No, of course it’s not because we think it’s funny. So while this would usually be a no-no in a sales pitch, we’re going to list all the things this Men Latex Batman Mask can’t do as a costume piece rather than a cutting-edge product of Waynetech R&D. It’s not bulletproof. It doesn’t have a built-in night vision display. It doesn’t have high-gain antennas in the ears. It probably won’t even conceal your identity if you’re right up next to someone you know well, and that’s not even due to some technological limitation. People are just bad at recognizing people in the DC universe, apparently.