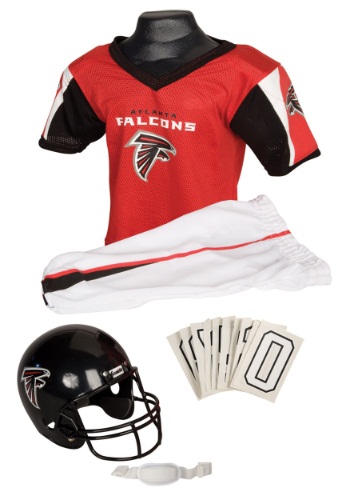 When your favorite team makes a return trip to the Super Bowl (and make no mistake, they will), they're going to need a seriously talented player to make sure they walk away with those nice golden championship rings. Someone with the ultimate dedication to both the sport itself, and also the Atlanta Falcons... a lifelong fan who wouldn't play for any other team, even if a talent scout offered them a dump truck full of money. Know anyone with that kind of dedication? We thought you might. Your little guy is probably the biggest Falcons fan in the whole world, and now he can become one of his heroes as quickly as it takes him to put on this awesome uniform. So have him join the roster this season with the NFL Falcons Uniform Costume!

Officially licensed by the NFL, this five-piece set is the perfect gift for the ultimate Atlanta fan who wants to fly his team's colors better than anyone else. It's got everything he needs to get ready for game day, including the the Falcons' signature pants, jersey, and of course, the helmet. Best of all, he can pick his own number -- the back of the jersey is blank, so you can iron on whichever ones he wants (iron-on numbers included)!

So whether he's suiting up and heading onto the field with the Falcons, or he just wants to dress up as one for Halloween, this NFL Falcons Uniform Costume is perfect for your Atlanta fan!