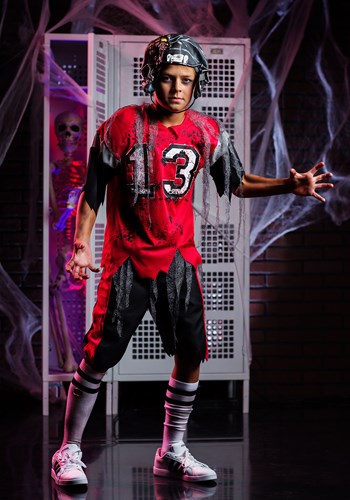 NUMBER 13 JUST GOT A LITTLE LUCKIER

Football can be a pretty dangerous game.  There's a lot of violence that can creep up amidst all that aggression and running around.  Sure, there's protective gear to help a kid out, but that can't protect anyone from everything.  Alien ray gun?  Nope!  Evil clowns?  Well, perhaps, but we'd rather not risk that kind of thing.  Zombie apocalypse?  Well, hardly anything protects against that, but at least a zombie can still play the game.

It's time to start a whole new football league!  The UFL?  Undead?  Sounds like a reasonable name, even if the players might get a little bitey sometimes.  Keep 'em focused, though, and it is certain to make for an excellent new twist on a famous old game.  And, at least, you know that there won't be nearly as many accidents.  Zombies are pretty resilient, after all.  Slow, perhaps... but we're sure you can figure a way to up the excitement.

Recreate the great American game with this fantastic undead twist.  Let your kid kick it off with this Dead Zone Zombie Boys Costume.  This polyester football design has a ragged and torn look perfectly appropriate for all your zombie needs.  The unfinished shirt fits great but looks just the right amount of awful.  The vinyl helmet has sculpted details and secures easily with security bands.  The mesh scarf only adds to the undead look, but a few blood smears wouldn't hurt.

KEEP YOUR EYE ON THE BALL

It is important to teach your kiddo the important details of the game.  Know where to run, what to dodge, and always keep an eye on the ball.  Now, that goes without saying, but when you're tyke player is also a member of the undead homid species, remind them that "eye on the ball" doesn't have to be literal.