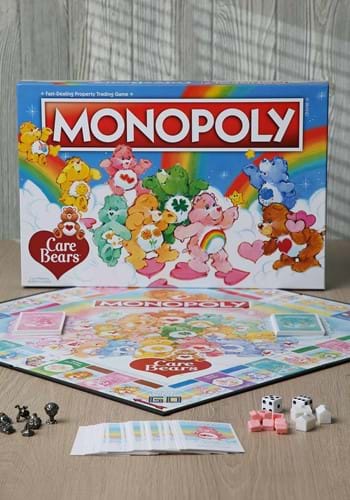 What do you think happens when the Care Bears play Monopoly? We bet it's a lot different than the way we used to play Monopoly on family game night. Things got a little cutthroat. Shady, unscrupulous deals were made. Empires were built. Properties were seized in order to pay outstanding debts. There were many tears upon bankruptcy.

The Care Bears are just so nice, we imagine it being much nicer than that. Cheer Bear probably lets Good Luck Bear pay off debt with a few hugs. If anyone gets too far behind, the other bears probably share their properties with them. And everyone walks away from the game feeling like a winner!

Well, this Monopoly Care Bears Edition allows you to play your favorite board game with the friendly bears from Care A Lot. The game comes with a themed game board and themed pieces. There are still the classic spaces, like GO and Jail, but the properties have been replaced by the main characters from the Care Bears. And the best part about this game? Its cheery visuals make you want to play a little nicer! (Of course, you can still play cutthroat Care Bears Monopoly if you must, since the classic gameplay is still here.)