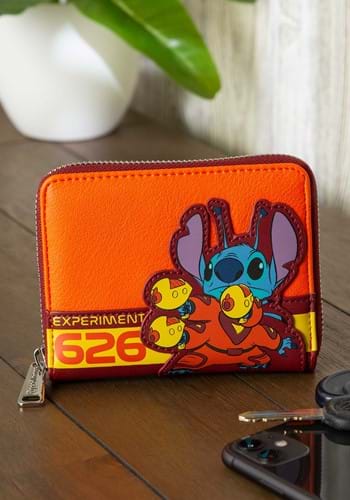 We know. Experiment 626, otherwise known as Stitch, is a dangerous escapee. He has a knack for destroying everything in his path and he's powerful enough to turn the entire Earth upside down. But... he's just so darn adorable! We just want to cuddle up with him and take him with us wherever we go. We'd totally give him a chance, just like Lilo does in the classic film!

Well, the folks from Loungefly thought the same thing! They love the little guy so much, they even made this Lilo & Stitch wallet so you can bring Stitch with you no matter where you go!

This Loungefly Stitch Experiment 626 Wallet captures the adorable... yet dangerous nature of the Lilo & Stitch character. The wallet is officially licensed from the hit Disney film. The wallet is made out of a faux leather, polyurethane material and it features a fabric lining. The exterior also has Stitch wielding some dangerous weapons on it! The wallet has a zip-around style and comes with multiple credit card slots and a bill holder in the interior. It even comes with a plastic window slot for your I.D. card. You won't be able to resist taking it with you everywhere!