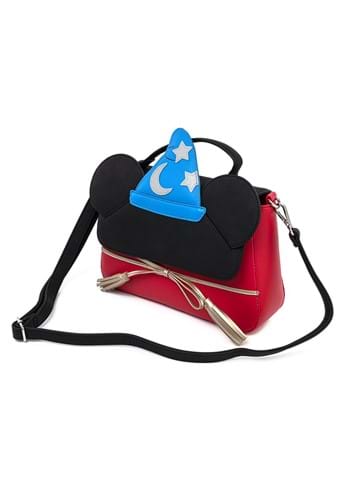 What Could Go Wrong?

So, you're an apprentice to a great wizard. He's acquired limitless knowledge about spells, enchantments, and every magic in between. You haven't quite learned the basics, but you've watched the great Yen Sid do every trick in the book. What could go wrong if you tried a little bit of sorcery yourself? A lot.

Mickey Mouse learned the hard way when he donned his master's magical hat and caused a ruckus in the castle. He accidentally reanimated an army of unstoppable brooms that nearly ruined the whole place! The good news is that Yen Sid showed up, just in time, to reclaim his hat. We happen to think you'll be much more responsible with that magical hat!

This Fantasia Sorcerer Mickey Crossbody Bag is an officially licensed bag designed by Loungefly. It captures the look of Mickey Mouse's outfit from the Fantasia animated movie, featuring the blue, star-filled hat on top. The bag is made out of a polyurethane, faux leather material, and the top flap is shaped like Mickey's head. The bag comes with metal hardware and plenty of appliqued details. The strap fits around your shoulder and is fully detachable, so you can also use it has a handbag. It's a great bag for anyone who wants to bring a little bit of Disney magic into their wardrobe.