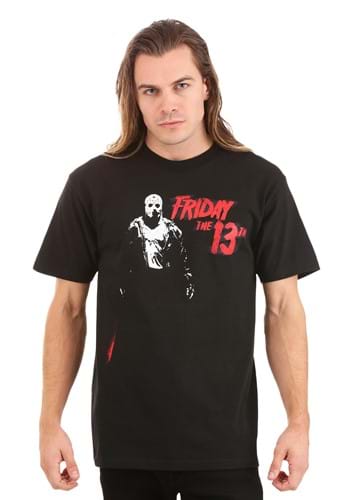 You can't keep a good Jason down. Many have tried. We've watched every single movie in the Friday the 13th franchise, and it's impossible. Every time that people think he's finally down for the count, he comes back for some more mayhem! They even tried freezing him and sending him into outer space. Nothing stops Jason and now, he's coming to invade your wardrobe.

Yep, he's tired of just causing destruction among teens and unsuspecting victims. He's hanging up his machete for a minute, to bring you some apparel that's to die for. He wants to wreak havoc in your closet with this Jason Vorhees Friday the 13th T-Shirt. It's a deadly shirt that will never die!

This adult shirt is officially licensed from the movie series. It's made out of 100% cotton, so it's made to hold up to the wear and tear of everyday life. It has a menacing image of Jason Voorhees on the front, complete with his trusty machete and his hockey mask. The words "Friday the 13th" are printed on the front as well. It's the one shirt that will keep coming back in your weekly rotation of t-shirts, again and again.