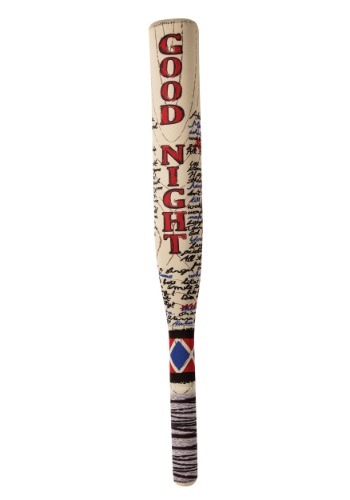 When it comes to Gotham villains, subtle is never a word that can really be used to describe any of them.  They are all huge personalities with ambitions that could topple even the reaches of Wayne Enterprises if Batman wasn’t working hard to stop them.  Fortunately, they occasionally decide that they have interest in hopping the fence to the team of “good guys” for a while, even if it is just to keep their own butts alive during some big crisis kind of event.

But, whether acting on the side of the do-gooders, the evil-doers, or a little bit of both at once, crazy characters like Harley Quinn are hardly going to walk softly.  Well… at least not without a bit stick, anyway.  That’s where this officially licensed Harley Quinn Suicide Squad Molded Bat enters the field.  This polyurethane foam bat is nearly two feet in length and proudly announces the last thing that any of her enemies are going to see:  GOOD NIGHT!  So polite when she’s about to knock ya out, huh!?