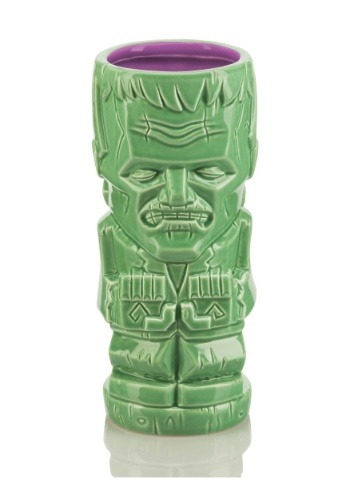 While you've probably heard of Dr. Frankenstien's prolific monster creation, people don't often discuss his lesser-known yet no-less talented career as a mixologist. While his combination of human remains and electricity had mixed results and ended in tragedy his bartender creations always were a hit and usually ended in conga lines. The only thing green and mean he had created in his past was his wild apple martini so it's no wonder he was overwhelmed when his passion project came to life. Here's the thing, if he had only mixed the two interests, perhaps his poor monster would have chilled out when it came to his fire phobia. If the good Doctor had simply put the lime in the coconut maybe his verdant new friend would have been sitting around the bonfire singing The Banana Boat song by the time a year was out.

This green and purple Frankenstein's Monster tiki cup is ready for eighteen ounces of whatever you decide to mix up at your next monster mash. Guests of both the human and creature variety are sure to appreciate the funky fun take on the tiki cup. The design is three-dimensional with a totem of the well-known creature crouching in the confines of the cup. While this cup is ready for a lively party, refrain from throwing it in the microwave or dishwasher, Frankenstein's monster has had enough interaction with electricity for one after-lifetime.

A Hula of a Time

When you cover all the little details, you and your guests are sure to never forget this party! This isn't your run-of-the-mill monster mash. Who knew Dracula could hula so well? You'd think the cape would get in the way. And hey, you play your cards right and poor Frankenstein might not mind those tiki torches so much!