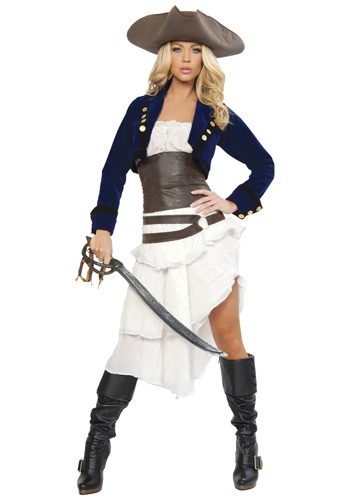 "Ahoy Matey" is an easy greeting! Now you just need a few phrases for other occasions. Like when you hop in the car, pretend it's a ship and say "All aboard you lazy scallywags!" Then, if you have to drop someone off you can tell people to walk the plank. Another good phrase could be "give me all your sweet treasure!", best used when trick or treating. If you do enough talking like a pirate, people might end up thinking you're the real deal!

This costume comes with everything you'll need to transform into a seafaring scoundrel. You'll be wearing a white dress and blue colonial style jacket, which is probably from your time in the royal navy before you became a pirate! You'll also be wearing a waist cincher, made of faux leather. The hat you'll be wearing is made of foam and is fashioned in the three-point classic style you see all pirates wearing. The final touch for this costume is the plastic sword you'll be carrying about. All of these items combined make for one authentic looking pirate costume, all you will need is a good pair of boots and you'll be ready to hit the high seas!

IT'S NOT JUST WHAT YOU SAY, IT'S HOW YOU SAY IT

When it comes to talking like a pirate, it's not just what you say that's important, it's also about how you say it! Make sure you work on that real strong pirate accent before heading out on the town. Good luck, and enjoy your costume!