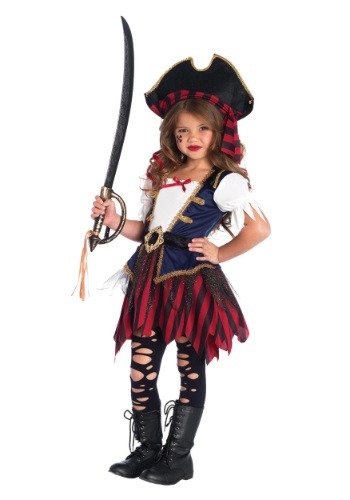 So, your child wants to be a pirate, huh? Well, if we had to guess, you are hoping that they don't plan on making a profession out of it. We personally would much rather see our kids grow up to be doctors or lawyers or astronauts. A pirate's work is dangerous, and probably not morally sound either. But that's why we need them to try pirating now, while they are young. Then we can show them that it's bad and they'll find a new dream job!

The trick to making them not want to be a pirate is to make being a pirate sound really boring. So, once they get their costume and go trick or treating, rather than eating the candy, have them catalog it. Take long notes on the size, wrappings, and color of each candy. But don't eat it. Just tell them that pirates don't eat candy, they only study it. This is enough to make any kid not want to be a pirate anymore!

It'll be pretty hard to convince them not to be a pirate when they are older when the costume they'll be wearing is so stinkin' cool! They'll be wearing a dress that is styled to look just like traditional pirate garb. And of course, there is the hat. Hat's like this are an essential piece of any pirate costume. When you put it all together you are left with one of the coolest pirate costumes to ever sail the seas.

So, just remember. We want them to have fun trick or treating, but not so much fun that they want to be a pirate forever. However you want to teach that lesson is up to you. Just make sure you do it right, or you might be left with one of the world's youngest pirates for a child!