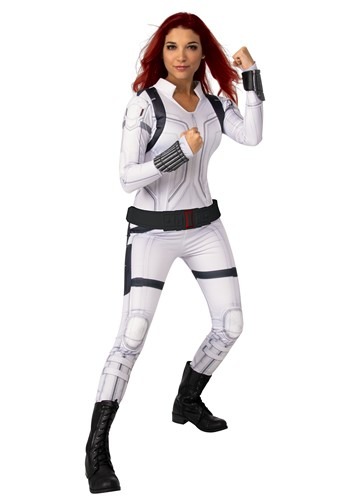 The Black Widow always adapts to the mission. If she needs to go undercover and step into the role as a foreign politician, she'll do it with ease. If she needs to get her hands on some valuable information, she'll slip into the enemy base unnoticed. If she needs to fight against a superpowered villain, she'll come prepared with hi-tech weapons to even the odds. And if she needs to take on a mission in the heart of icy HYDRA territory, then it means she's going to equip herself with some pristine arctic gear!

If you want to wear a Black Widow costume that has a striking look suitable for arctic missions, then this Women's White Black Widow Costume is an easy choice. It's officially licensed from the 2021 Black Widow movie and will have you ready to kick some serious butt.

This women's Black Widow costume begins with a white jumpsuit that has printed texturing and printed zippers to help give it a realistic look. It even has printed armor pieces, along with some printed straps around the legs and the shoulders, so you'll look combat-ready! The wristbands are modeled after the Black Widow's signature weapon, the Widow's Bite. Finally, the black belt around the waist has the appearance of a tactical belt, bringing the whole look together. Whether you're suiting up to battle against some old enemies, or gearing up to take your place in the Avengers, this costume will have you feeling prepared for anything.