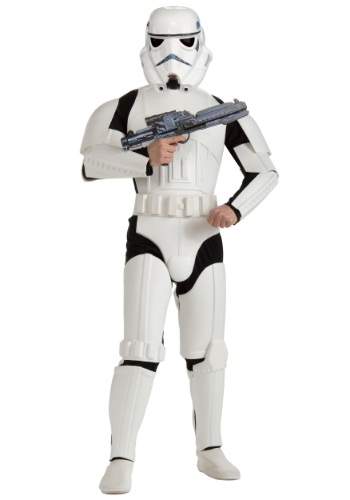 So you finally made it! You got promoted to the Stormtrooper ranks after years of being on janitorial and sanitation duty. It’s quite a bit of a step up and you should be proud to be a part of the greatest fighting force the universe has ever seen.

So when you slip on the iconic white armor and place the faceless helmet over your head, you can feel like a true soldier of the Empire. In this Adult Deluxe Plus Size Stormtrooper Costume, you, too, can feel like a powerful clone soldier aboard the Death Star, or on a Star Destroyer, or anywhere else in the galaxy. Just be careful, because this armor doesn’t protect you from blasters, lightsabers, or, uhhh, spears made on the forest moon of Endor. BUT! It does look really intimidating, and in a symmetric box with 63 other Stormtroopers, you will look pretty rad. On top of all that, you will finally get to spend your time traveling to distant planets rather than washing out the compactor from level nine twice a week. And goodness knows that you couldn’t stand to do that much longer in your life.

So when you join the ranks of the greatest galactic army ever assembled, make sure to pick up this outfit to look the part. This officially licensed outfit--complete with the classic white armor, black jumpsuit, and two-piece helmet--will make sure you fit right in with the Empire’s best and brightest soldiers!

$59.99
Item # RU810268 | Write A Review
Exclusive
Sign Up To Be Notified When Your Size Is Available
Items Included
Product Highlights
Size Chart
2X
Inches Centimeters
Costume Sizing Tips
Product Description
Questions & Answers
There are no questions for this item yet. Be the first to ask a question!
Ask a Question
Reviews Write A Review