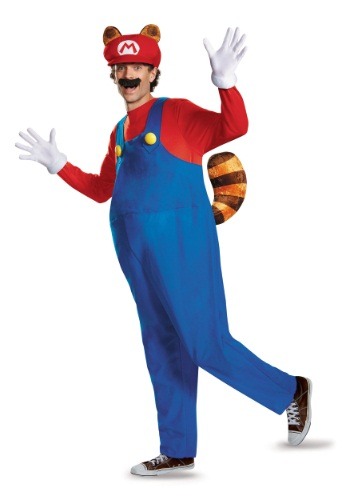 Super Mario Bros 3 was a complete game changer. Before that game, Mario was confined to walking on the ground and swimming inside sewer tubes. Then came the Super Leaf, which is perhaps the greatest known power-up in the history of video games (or at least the history of Mario). It allowed Mario to get a big fluffy tail to whack enemies and a pair of adorable raccoon ears to… well, those only seemed to serve the purpose of making Mario look adorable. And now that we come to think of it, what does being a raccoon have to do with being able to fly?

Okay, so maybe a lot that went on in Super Mario Bros 3 didn’t make a whole lot of sense, but things don’t need to make sense to be awesome and gosh darn it, Raccoon Mario is the best thing that ever happened to the series. Now, you can become the flying Italian plumber with deluxe Mario Raccoon costume.

The costume comes with a red and blue jumpsuit designed to look like Mario’s overalls, except this version has a little surprise in back. That’s right! It comes with a cute raccoon tail attached to the back. Unfortunately, it probably won’t help you fly to gather up coins at the top of the level, but you will look ultra-awesome in it just the same. It comes with the matching hat that has raccoon ears attached to the top to complete the look, so you’ll be ready to take on some Koopa Troopas no problem!