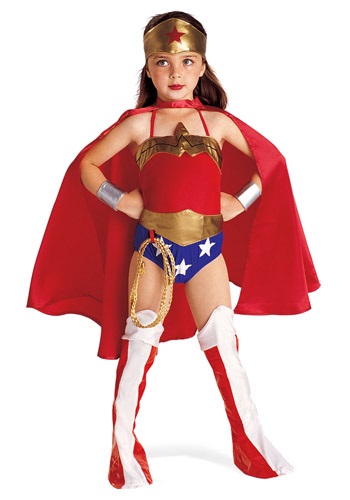 Your little girl is much fiercer than you could have ever imagined. She doesn’t like taking orders, like when you tell her that it’s bed time, and she definitely doesn’t like it when she sees people breaking the rules. If a supervillain like Doomsday arrived at your home, you’re almost certain that she’d be able to take him down in no time flat! It’s almost as if your child has the blood of an Amazon warrior running through her veins…

Maybe she is a superhero. Maybe she’s just been waiting for her opportunity to shine and maybe that time is now! Maybe, just maybe, it’s time that you geared her up in this Wonder Woman costume for girls.

Yes, this officially licensed costume is based on the DC superhero and it’s the perfect outfit to get your girl ready to face off against the forces of evil. It comes with a child leotard that has a bright red top and a blue bottom with star designs on it. It also comes with a bright red cape that matches the leotard. The golden headband and wrist cuffs will help your child feel like the one and only Diana Prince, while the boot tops add that finishing touch that will make her nearly indistinguishable from her comic book counterpart.

Make sure to train her in some Amazonian martial arts skills and don’t let her leave home without her golden lasso!