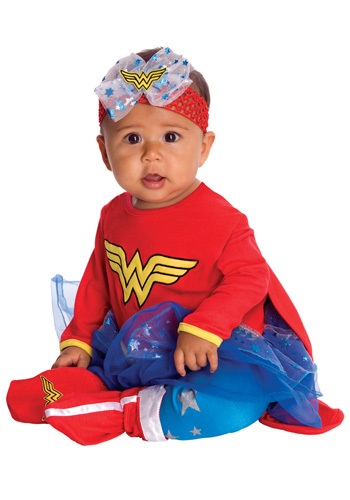 When it comes to superheroes, it's best to start them young. Sure, they might not be super good at walking yet, but they can crawl and that's enough! If you start them on their superhero training now, by the time they are walking they will be better at saving lives than they will be at saying three syllable words!

Some heroes don't get started until they are older, and that's fine; but the superheroes that start from a young age are always the strongest, and they have a strict moral compass that will keep them on the straight and narrow through all of their fights. Do you think Wonder Woman just woke up one morning in her early twenties and said: "Hmm, I guess I'll try my luck at becoming a fierce Amazon warrior." No way, she trained from a young age, and she trained hard! If it's good enough for Wonder Woman, then it's good enough for us.

This costume is the perfect way to start your young one's superhero career. After all, it's important to look the part! They'll be wearing a romper with an attached tutu and the Wonder Woman logo on it!  The tutu is bright blue and matches perfectly with the bright blue pants.  There is a red cape attached to the romper and the costume comes with an elastic headband with a bright blue bow. All they'll need now is the whip, but we recommend letting them get a little older before handing that over!

When your child becomes a superhero, they'll need an awesome name. Sure, you could call them Wonder Woman, but do you know what would be even cooler AND more accurate? Wonder Baby. That's right, the baby wonder that is taking down criminal enterprises by storm. Sounds pretty cool, eh?