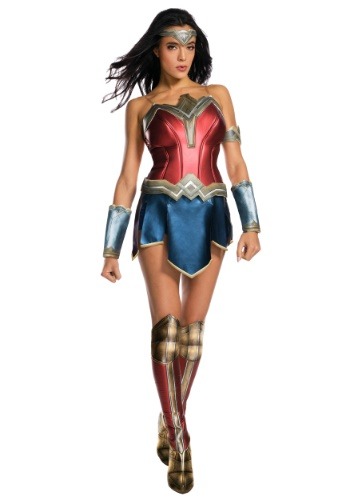 How about that Wonder Woman movie theme? You know the one we’re talking about. It has that ethereal sounding electric cello that goes a little something like, "Nee Nee Neeeeh Neeeh". Every time we hear that tune, we get pumped, because that’s when Gal Gadot is going to kick some major bad guy butt and nothing is better than Gal Gadot pummeling some super villains, whether she’s doing it solo, or she’s teaming up with Batman and the rest of the Justice League.

Now, take a look at this Wonder Woman movie costume. Did that theme just play in your head? We wouldn’t be surprised if it did. This officially licensed costume comes from DC’s cinematic universe and it does a great job of recreating the look worn by Gal Gadot in the films. It comes with spandex blend romper that is designed to look like Amazonian armor. It has a red top with gold accents and a blue skirt attached to the bottom. It also comes with a belt, tiara, a pair of gauntlets, boot tops and an armband to fully round out the look. Just put all the pieces on, take a look in the mirror and you might just hear the Wonder Woman theme song playing in your head!

Actually, you should probably download the theme song on your phone. That way, you can make sure to play it every time that you walk into a room while dressed as the one and only Wonder Woman.