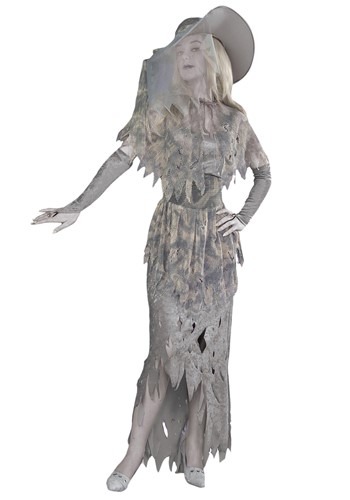 BOO - WHATS UP WITH THAT?

This ghost costume looks frighteningly realistic, doesn't it? You know what's not all that realistic? The idea that ghosts would say "boo" to scare you. We aren't really sure why saying boo is a thing at all, to be honest. It's not like we have done our research, we haven't been searching for an answer, it just seems like their might be other stuff worth yelling if you're a ghost, you know?

Saying boo doesn't actually mean anything, really, you might as well just grunt or yell. If you wanted to add to the scare you could say something scary like "Your soul is mine!" or "Your dead!", but we still just assume that ghosts would say boo. We just don't get it, there are so many other things you could say. Oh well, maybe once we have died and come back as a ghost we will understand.

This whole dress is downright spooky! Much scarier than the phrase "Boo!" anyways. The entire ensemble comes in a tattered heathered gray, leaving you looking pale and, well, dead. The style of the dress and hat is like something out of the 1950's, making it all the more believable that you are a ghost from the past, here to haunt the living for eternity. We have even included a pair of gloves, to cover your hands, showing as little skin as possible to leave you looking like a pale white figure, illuminated by the moonlight.

WHO WOULD YOU HAUNT?

When you become a ghost, who will you haunt? We think we would like to haunt an animal shelter. Dogs and cats are supposedly really receptive to ghosts, and it would be pretty nice to be able to hang out with puppies and kitties all day long! Maybe we will see you there?