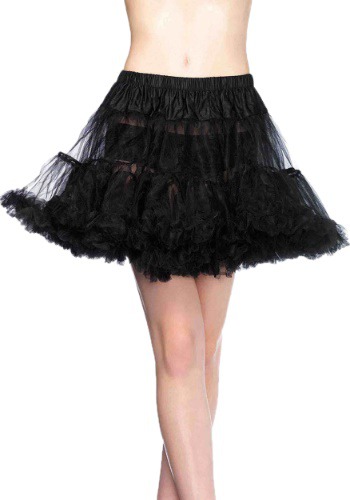 A Piece of History

Petticoats have a fascinating history. More than just an underskirt to enhance volume, they were originally made to be seen, and allowed for more movement in dresses so people could dance the waltz more comfortably. So, by picking up this Women’s Black Tulle Petticoat, you’re practically picking up an important part of clothing and costume history!

In more modern times, Mary Wollstonecraft (a famous writer) was called a “hyena in petticoats,” which sounds pretty fearsome to us. And the phrase a “petticoat government” has been used in both positive and negative ways to describe a society where the women are all in charge. So petticoats have a story or two behind them, and we bet this Women's Black Layered Tulle Petticoat has a tale all its own!

Who knew there were so many uses of “petticoat” in history and popular culture? This underskirt has an elastic waistband and two layers of tulle. It’s a far cry from the original petticoats, which were more or less just full-length dresses—but hey, things are bound to change over time!

We know that petticoats are meant to add just that little extra oomph to your outfit. And this will surely do that for you. But it’s also fun to think about how far this undergarment has come and the different things it might represent. So, throw this on and have fun, look great, and be thankful that full-length Victorian gowns aren’t still in fashion.