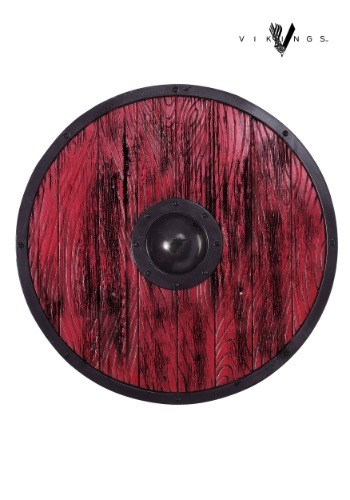 Ragnar isn't quite the type of guy that really thinks about taking the easy path. He argues with his Jarl and wants to go seeking new lands. He provokes folks bigger than him. He rubs other Jarls the wrong way. He even incites a bit of doubt and uncertainty among his entire community by bringing home a Christian and deciding to keep him around as a babysitter for a while. No matter how much Odin loves him, it's a good thing Ragnar has a bit of extra protection around!

Make sure that you have the same shield from harm when you gear yourself up with this officially licensed Ragnar Lothbrok Red Shield from Vikings. This is a bit of Made by Us magic, part of our line of costumes and accessories designed by our in-house team to serve as faithfully recreated replicas of your favorite shows! Our Red Shield is a large, plastic, round shield that is painted black and red to look like the same ones wielded on Vikings.

Depending on which season of Vikings you want to live out, this shield is a perfect way to finish off your Ragnar costume... or might be a good one for Bjorn, too.