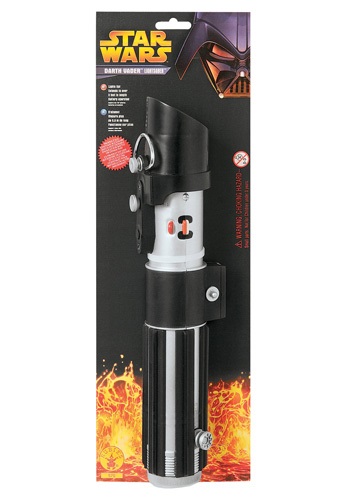 Did you know that every Jedi, as they move through their apprenticeship with a Master Jedi, builds their own lightsaber complete with a kyber crystal core? Darth Vader was no exception. Of course he was Anakin Skywalker when he first did this and this earlier lightsaber was taken by Obi-wan during that climactic battle on Mustafar and eventually given to young Luke Skywalker on Tatooine decades later.

But, when the Sith Lord emerged after his recovery, he built a new saber, a red one to reflect his new force alignment. And guess what? Now with this Vader Red Lightsaber, you can own that exact one, without having to go through the trouble of actually training to be a Jedi, and then the painful transition to the Dark Side, and all that business--you don’t have to lose any limbs for this saber!

Just be careful you don’t stumble across an angry Mace Windu while you wield this saber. He might not be so in awe of your Sith powers, especially after all the, ahem, events on Coruscant. But other than that, feel free to try your hand at controlling the galaxy with your fearsome Force powers!