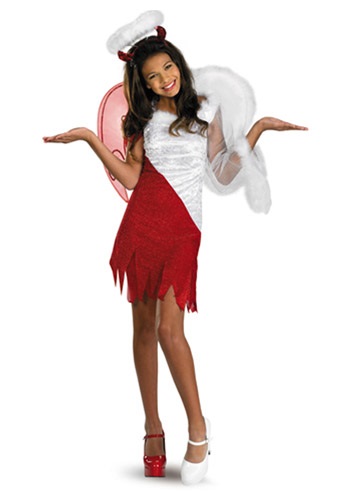 ALL THINGS IN MODERATION

The idea of a heavenly devil seems pretty ironic at first, but when you think about it, it makes perfect sense! A lot of things come as a mix of good and evil. Just about all people are, on some level. Besides, What's a little sweet without a little salty? Having a little bit of bad in the mix keeps things interesting. Too many sunny days in a row, and you might find yourself missing the rain!

Ever felt like your conscience was like a little devil and angel on your shoulder, talking back and forth? We know we have! One side is like "Don't eat the last onion ring, someone else might want it!" and the other side is like "If you get this unhealthy treat out of their way, you'll actually be doing them a favor by removing the temptation!" We think you can probably guess which side is the angel, and which side is the devil.

This awesome costume almost feels like two separate costumes thanks to the way it splits in half! The dress you'll be rocking is half red and half white, with a different style to each half, to match the mood of good or evil! You'll be wearing a set of wings, with one wing like an angel's wing and one wing like a devil's! The finishing touch for your costume is the headband you'll be wearing, which has devil horns AND a halo on it!

A BATTLE OF GOOD AND EVIL

When you go out in your heavenly devil costume, which side will reign supreme? It's a battle of good and evil, and only you can decide who comes out on top! Whatever you decide on, we think you're going to have a lot of fun!