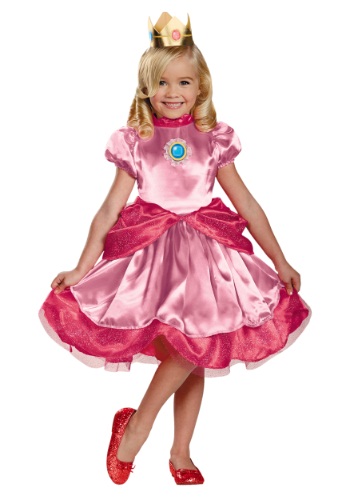 She always doting on princess characters, that's to be sure. But if she also has a penchant or two for taking on the action on her own too, well, then there's probably just one princess for her. All she'd have to do is look towards the Mushroom Kingdom and the exploits and adventures of Princess Peach to find her next idol, and when she gets a load of this toddler Princess Peach costume, she's going to swoon.

Yes, with this sweet costume, she'll be able to take part in the Mario Bros action, and they'll be plenty of adventures and fun for all to go around. Suit her up for Halloween or for play time, and life will never be the same when Peach is on the scene! This adorable costume has everything she needs to become the video game character come to life. A dress and petticoat are styled just like Peach's everyday wear, glitter accents and a plastic gem appliqued to the chest add the lovely accents of Mushroom Kingdom royalty. Complete her costume with the included crown headband, and she'll be ready to put the pedal to the metal in her MarioKart racer or to jump in on any adventure with Mario and Luigi. Heck, team her up with her entire gang of friends in our Nintendo costume, and you can get Toad and Yoshi in on the fun too. Sounds like you've got one heck of a Nintendo party coming your way!