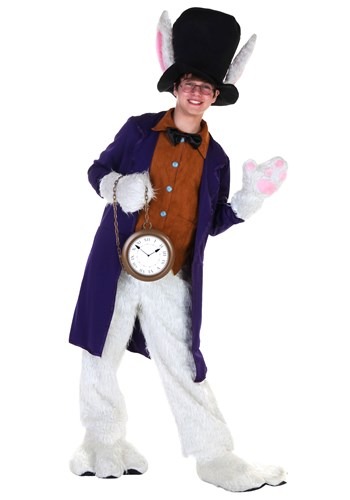 They don’t call it “Wonderland” for nothing; there is so much mystery and awe here. Take the curious (and curioser) White Rabbit. What do we really know about him? We know he’s late (late, for a very important date!) to get back to the Queen. We know he has books and mirrors and rocking chairs in his rabbit hole. But...we don’t get a lot of information about Mr. Rabbit. Neither friend nor foe, this catalyst character is an intriguing part of Wonderland—one your kid would love to explore!

In this Teen Wonderland White Rabbit Costume, your kiddo can make up the true backstory of the White Rabbit—well, true to their liking! Maybe the White Rabbit was once the Prime Minister of Wonderland until he was overthrown by a coup and forced to be the herald of the new Red Queen? Or perhaps the Rabbit is actually a well-known Wonderland comedian, packing houses every night after clocking out of his day job at the palace. The White Rabbit we know could be a cover-up for Wonderland’s most elusive spy, or...you get the point. In this costume, your creative child can invent a character so rich, interesting, and exciting, that everyone in Wonderland will be asking, “Alice who?”

This classic White Rabbit ensemble features white faux fur pants (made to look like rabbit legs) topped in his signature purple waistcoat over a brown faux suede vest and attached bow tie. The big black top hat has attached furry bunny ears, and the feet and mitts are made of the same white fuzzy material. Pick up a clock accessory and make sure it’s wound and accurate. We don’t want your kid late for the costume party—it’s too predictable!

So whomever the real White Rabbit is deep down, we may never know. And that’s OK, because in Wonderland, nothing is ever as it seems anyway. Truth is always subjective, and time is fickle, indeed!