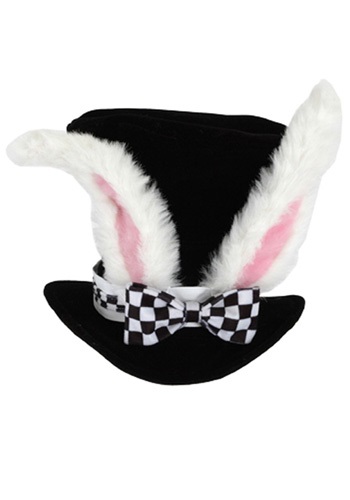 It all started when Alice followed that poor, jittery rabbit. She was simply lounging under a tree one minute and in Wonderland the next, simply because she wanted to know what that dapper rabbit in a waistcoat was late for. Well, he doesn't show her that much respect once she's down there. Once he acknowledges her he insists on consistently calling her Mary Anne and treating her as his assistant. We can't blame him though. Just imagine working for a boss like the Red Queen, you might be a little brisk as well!

The transformation has never been easier with this dashing top hat with a checkered band and fuzzy white and pink ears. Pair it with a bunny nose, fluffy tail, and chained watch to make the look complete. We promise we won't make you work with the Red Queen if you don't want to. It would certainly be cute when paired with any of the many different Wonderland characters! And hey, if you're late to the party it's what everyone's come to expect from a bunny of your type.