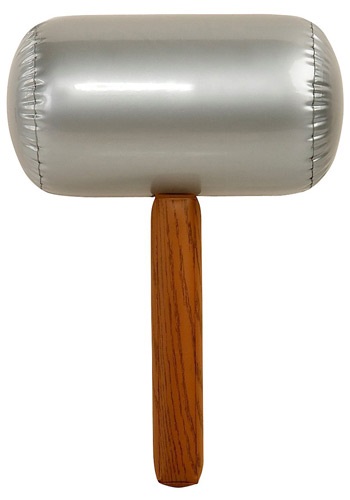 Some young whipper snappers might not remember some of the old video game power-ups. Before the days of mushrooms that turned you into a giant and med-kits that fully restored your health, there were far more archaic methods. You had to walk up hill through an entire level just to clear it (through snow, no less). You had to collect 100 coins just to get an extra life. And if a giant ape threw barrels at you as you tried to rescue your girlfriend, then you had to grab a giant mallet to bash them apart. That’s how we liked it!

Now anyone can get a taste of old school power-ups with this inflatable mallet! This toy accessory looks like something straight from an arcade game from the 80s. It’s easily inflatable and has a printed wood and silver design. It probably won’t help you smash any barrels thrown at you by an angry ape, but if barrels are being thrown at you on a regular basis, you should probably be looking for a lifestyle change instead of shopping for toy mallets.