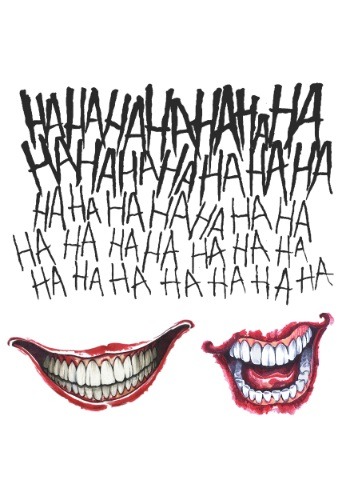 The Joker has certainly been through a lot in his weird life.  Not that we really know most of it.  He keeps the truth of so many things pretty secretive, but we’re pretty sure not much of it has been especially good.  That gothic world mixed with the crazed fear and unpredictable insanity that is the Joker leaves us all wondering what might come text!  What other secrets might he have!?

Well, believe us when we say that we certainly didn’t see this coming.  Not only has the Joker stepped up into the world of the anti-villain, joining up with a few other technically bad guys to help save the world for once, but he’s revealed a few other surprises, too.  Of course, we speak mostly of just how built the guy turned out to be under that green and purple jacket!  If you’re looking at following in the Joker’s newly heroic(ish) footsteps, your first step will be this officially licensed Suicide Squad Joker Tattoo Kit!  Way easier to apply than whatever the Joker actually went through, these tattoos will give you that hysterically crazy look that you’re going for.  Couple with a green wig and wide smile and the world of villainy won’t know what is coming!