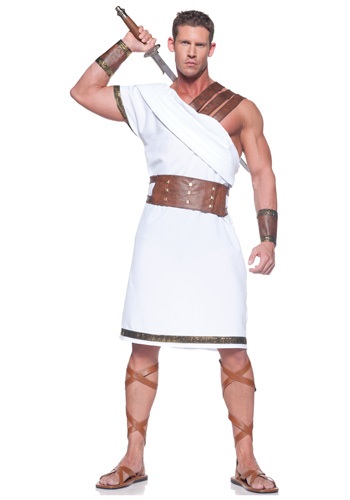 So you think you have what it takes to be a Greek warrior? Have you thought this through? Think about who Greek warriors face. They face sea monsters and serpents and gods. But worst of all, they face the Minotaur. Could you handle the Minotaur? Remember, you aren't just fighting on a level playing field. You'll be fighting on his home turf, in an ever-changing magical labyrinth.

It sounds pretty daunting, but we think you can do it. We have some advice for you, advice so sound that even the Goddess Athena would agree! Do NOT grab this bull by the horns. There are instances in life where that saying is applicable, this is not one of them. That Minotaur would toss you around like a rag doll if you try to grab him like that. Don't worry, we do have an idea that might be of some help.

Before we tell you the secret to beating the Minotaur, we thought we should tell you about your costume. This costume comes as a classic Greek style tunic! We've accented it with faux leather to give it a tougher, more rugged appearance. The tunic is made of 100% polyester and the faux leather shoulder strap will be running over your left shoulder. Lastly, the included belt and wrist gauntlets will complete your Greek hero look. Oh, and you better bring a sword too.

THE SECRET TO BEATING THE MINOTAUR

So, the secret to beating the minotaur. Have you ever heard of a cattle grid? If not, It's a set of bars that you lay on the ground that cattle can't cross because their hooves would get stuck. We were thinking that if you brought a couple of these into the maze, you could put one on either side of the minotaur and trap him! He'd never have a chance with those hooves of his.