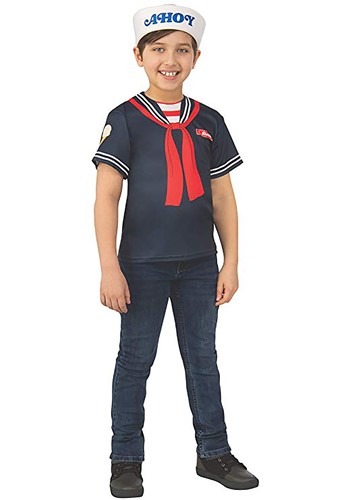 After the events of July 4th, 1985, no one expected Steve Harrington to return to the ice cream shop like everything was normal. In fact, even if he had wanted to, the place wasn’t exactly in working order. Of course, Steve being the babysitter extraordinaire that he is, knew he’d need to recruit the next generation of ice cream scoopers.

That’s where your kid comes in. Steve isn’t looking to show another teenager the ropes when it comes to serving up delicious USS Butterscotch sundaes. He knows the future depends on the kids. Now, your child probably has a few years before they can tie on an apron and man the counter at any job, but that doesn’t mean they can’t practice. All they’ll need to get ready to learn from the master is an officially Scoops Ahoy uniform. Without one, they won’t be granted permission to board.

Get your child prepared to sail the seven seas of ice cream with this Kids Stranger Things Steve’s Scoops Ahoy Uniform Costume. This officially licensed ensemble consists of a t-shirt with printed graphics. The sailor-styled pullover pairs perfectly with the included hat that features the charming greeting every Scoops Ahoy patron should hear when they enter the shop. While your kiddo is practicing shaping perfect ice cream spheres and serving them all with a smile, they can relax just a little knowing that Steve has their back. Or their front actually… Until your kid masters their sundaes and shakes, they can pass themselves off as that charming Steve Harrington with his nametag printed over their heart!

Whether they’re fantasizing about serving ice cream during their first summer job, or just can’t get enough of Stranger Things season 3, your little dreamer can dive into the fun with this Stranger Things Scoops Ahoy uniform for kids!