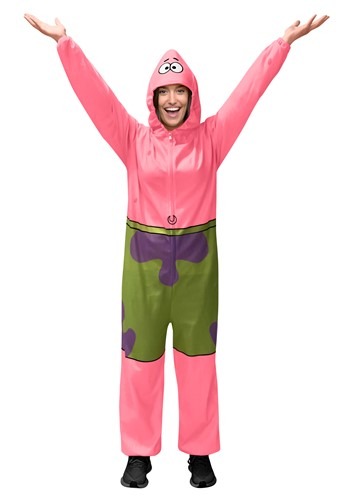 "F" Is for Friends

Like Ren and Stimpy, Jimmy Neutron and Carl, Arnold and Gerald from Hey, Arnold!, SpongeBob and Patrick deserve a spot in the Friendship Hall of Fame. SpongeBob may be the cartoon's star, but he's nothing without his star-shaped bestie.

He's not exactly the brightest coral in the reef, but Patrick's loving, loyal, and always down for some jellyfishing! Truly, SpongeBob would be lost if Patrick wasn't there to explain what air is -- among other important questions. The two of them have all sorts of fun together, whether it's jellyfishing or bothering Sandy during hibernation or playing pranks on Squidward. And that's not even going into the amazing adventures they have protecting the Krusty Krab and all of Bikini Bottom from Plankton.

We are all fans of SpongeBob, so we understand why you want to dress up like someone from the show for your next costume party (or just for a trip to the grocery store). But going as SpongeBob is kind of predictable, isn't it? Instead, you should dress up like another star... a certain star who's pink and squishy and fun: Patrick!

Be the star of the next costume party (literally!) with this SpongeBob SquarePants Patrick Star Union Suit/Onesie. The officially licensed costume is made from 100 percent polyester fleece fabric and polyurethane foam. The jumpsuit features all-over printed graphics, including Patrick's signature pink skin, belly button and green swimtrunks. There's a front zipper for easy wear, along with elastic at the wrists, ankles and front edge of hood for a comfy fit. In addition, the foam panel on top of the hood is embroidered with eyes and eyebrows.