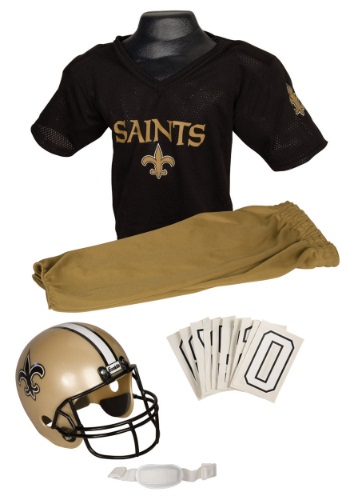 Did you know that the New Orleans Saints were named after the famed southern hymn and jazz standard most identified with New Orleans? That’s right - “When the Saints Go Marching In” ! Even cooler, it’s no coincidence that that the franchise’s official birth was announced on November 1st, otherwise known as the Catholic All Saints’ Day! And Real Talk: When it comes to one of the most beloved football teams in the history of America, no one has been cheered on harder than the New Orleans Saints when they went to and then won the Super Bowl back in 2010. After a tough decade for the Big Easy, football fans everywhere rallied together to cheer on Saints in a literal march to football victory!

But if you’ve got a kiddo who’s the biggest Saints fan ever, then all of this old news! In fact, you probably have more fun facts logged into your brain thanks to your little pro than we do, so we’ll just skip the stats and get straight to the point: When it comes to playing for the NFL, it’s a big dream that almost all pint-sized football fans love to have. And whether it becomes something real or not…who cares? Half the fun is letting them go wild with imagination! So why not blow their entire minds and let them live it out in real time with this Saints NFL Uniform Set?

In this uniform set, they’ll instantly look like the number one prospect to join their favorite football team! The costume comes with a black jersey that sports the Saints name and logo on the front, a pair of gold football pants, and even comes with a matching helmet that will stay securely on your superstar’s head with the help of the included chinstrap (note: please don’t use this helmet as protective gear!). Your little pro can even choose which number they want to be and attached it to the back of the jersey with the included iron-on stickers! In this costume, your child can show the Saints exactly how the game is played, whether it’s during Halloween or some rough and tumble football right in your own living room!