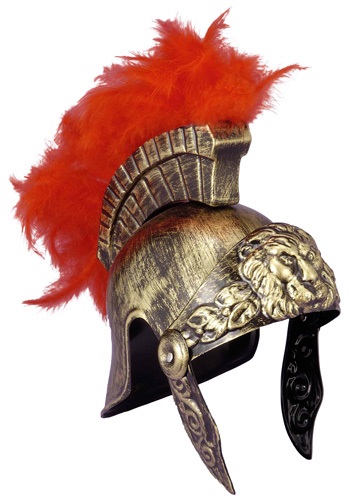 What kind of equipment do you have, Mr. I'll Protect The Kingdom? You're telling us you believe you're ready to lay waste to the enemies of the Roman Empire, but you don't have headgear to protect you from as much as a rock thrown by a peasant? Well, good thing we're here, or you would have dodged history and been just another number. Fear no more: you'll be a Spartan warrior, battle ready, with our authentic Roman Warrior Helmet.

With its antique appearance, this not-quite-true artifact from the empire our Roman Warrior Helmet, glazed in gold and bronze paint and featuring an authentic red feathered crest. Need to assemble in a hurry? Not a problem with our movable visor and cheek guards. We do have to warn you, though: as realistic as our helmet looks, it is in fact made of plastic, so don't get yourself involved in a situation involving deadly arrows and armies.

You may not have Gerard Butler's mighty abs, but you can have his helmet. And if you're lucky his face! If you've got all three, well, maybe you don't need the helmet after all. Even if you don't, at least you'll still look cool and just as bad, ready to take back your empire. (But work on that core!)