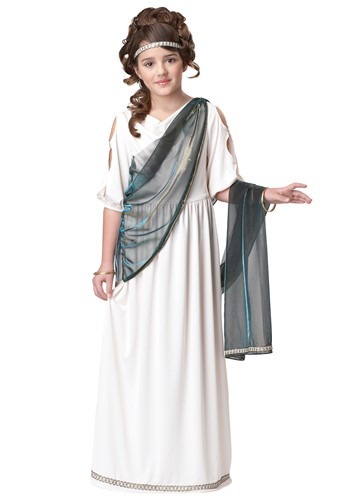 Caesar might be the ruler of Rome, but he sure is gone a lot. When he's off veni, vidi vici-ing in what would later become England, someone has to make sure that affairs of state are going smoothly. It might as well be you, right? (There's something sketchy about that senator Brutus, so it definitely shouldn't be him, anyway.) You have a lot of great ideas to usher this empire into a real Golden Age. First, all women should have equal voting rights! Second, no more animal killings in the Coliseum! All of the lions and tigers and bears (oh my) get to retire peacefully at a zoo that you're going to build. Third, we don't have to wait several centuries to invent gelato and pizza! Let's start coming up with flavors right now!

You'll look royally magnificent in this Roman Princess Costume! The floor-length ivory pullover dress looks absolutely elegant thanks to its lovely V-neck three-quarter cold-shoulder-style sleeves, and white braid edging at the hemline. A shimmery metallic-blue mesh sash is sewn to the left shoulder and drapes gracefully across your chest, around the back, and over your left arm. It's edged with the same white braid as the hemline, which is aso featured in the headband that pulls back your curls - much more comfortable than a crown or a laurel wreath, wouldn't you agree?

Dust off your best sandals! A Roman princess has plenty of royal appearances to make. Whether at a costume party, a dress-up game, a historical pagent, or Halloween night, you'll look your regal best.