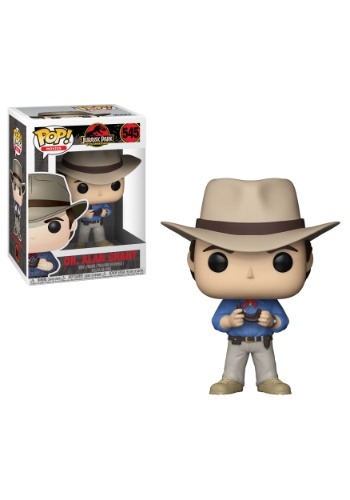 "Velociraptor's a pack hunter, you see, he uses coordinated attack patterns, and he's out in force today. And he slashes at you with this, a six-inch retractable claw, like a razor, on the middle toe. They don't bother to bite the jugular, like a lion, they just slash here, here -- or maybe across the belly, spilling your intestines. Point is, you're alive when they start to eat you. Whole thing took about four seconds."

Think Dr. Grant's a little rough around the edges? Yeah, we do too. But we're big fans! We've pretty much been obsessed with Jurassic Park since the first time we saw it, and did it leave a big impression. Well, 25 years have rolled around and it's time for the anniversary of the original Jurassic Park hitting the theaters. So, what's the only thing to do? To get some new Jurassic Park stuff!

Funko agrees, of course, which is why they've release the Pop! Movies Jurassic Park series inline with the 25th anniversary. And, when it comes to pop culture memorabilia, you know you need to get plenty of Pops. So, start out your Jurassic Park collection with this Dr. Alan Grant figure. The perfect Pop! representation of Grant, it's even depicted holding that velociraptor claw!

This Pop! Jurassic Park Dr. Alan Grant Vinyl Figure stands about 4 and a half inches tall. It comes in a window display box so you can display it as you choose. Check out our entire Pop! Jurassic Park 25th Anniversary series to collect all of your favorite characters!

$8.99
Item # FN26729 |       Write A Review
Sign Up To Be Notified When Your Size Is Available
Items Included
Product Highlights
Size Chart
ST
Inches Centimeters
Product Description
Questions & Answers
There are no questions for this item yet. Be the first to ask a question!
Ask a Question
Reviews        Write A Review1 Review
happy
By Eduardo Vargas Pereira / June 2, 2018
I love it. Its very fast.
Was this review helpful to you?YesNo
Write A Review