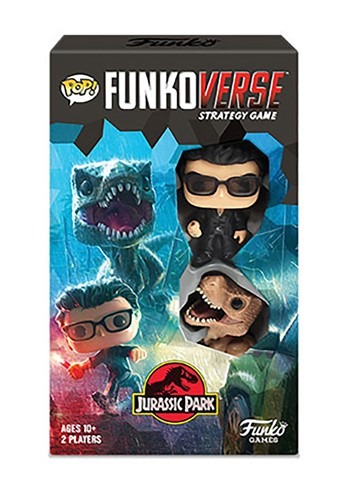 We're not sure if Malcolm was flirting with that whole water droplet on Ellie's hand bit. But, he's going to need to come up with a whole new set of tactics to win the day when he's up against the T-Rex! This monster doesn't care what way the water falls so long as it's getting his lunch—and it seems to think that Malcolm looks fun to snack on!

Find out what will happen to the Chaos Theorist when he's up against the Tyrannosaur in this Pop! Funkoverse Jurassic Park Expandalone Strategy Game. If you've played the Funkoverse games already, you know what you're in for in this collection. It is both an expansion to the Funkoverse Core games as well as being its very own 2-player game. Choose a scenario and pick your characters, then dive into the fun. Each round, your characters can take two actions, including their special actions. Take care to use them strategically, because your unique abilities can only be used every few rounds. If your rival is getting the upper claw, just throw some chaos their way and knock them out! (You'll get some bonus points, too!) Complete your objectives and claim the most points to take command of Jurassic Park!

Flare Up the Fun

Malcolm and the T-Rex are pretty big characters in their own right. But, you can make your Funkoverse strategy game even more fun when you combine this Jurassic Park Expandalone Edition with some of the others. Meet up with Ellie and Alan or even see what happens when the T-Rex goes on a rampage through Harry Potter's Diagon Alley! There's no limit to the fun you'll have in the Funkoverse.