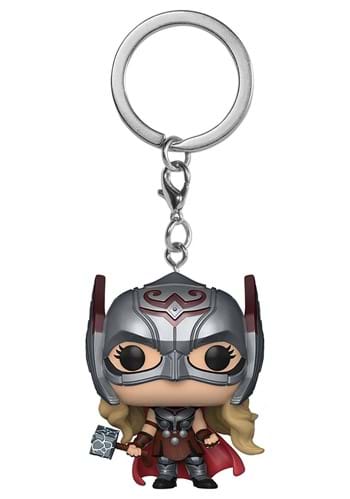 Jane Foster was a likely successor to Thor. She not only has been around the Asgardian god since his early trips to Midgard but has a ton of knowledge about the 10 realms. In the comic books, Jane was a fantastic superhero. At the time, Thor was considered unworthy, so he couldn't lift his mythical hammer, Mjollnir. Jane took up the role of Thor and defended the realms while Thor found himself. It was really a great story. A remarkable aspect of that story was Jane and Mjollnir's dynamic. Even Thor was shocked (and it's pretty hard to put a god in awe) when he saw how his old hammer flew for Jane (it had a mind of its own). It was like they were partners more than anything. If you are looking for a neat partner to bring around with you, look no further and check out our POP Keychain: Marvel Studios Thor: Love and Thunder - Mighty Thor.